My work addresses British literature of the long 19th century in relation to science, philosophy, and intellectual history. I also work on the literature of South and Southern Africa.

My current book project (described in detail below) is about uncertainty, in its several literary and scientific forms, in 19th-century Britain.

I'm also working on a second project about the relationship between weather/climate and social form in 19th-century Britain and the empire, which examines literary, scientific, and social theory materials.

Among other topics, I have written articles on rumor in the novel; on cloud studies, meteorology, and theories of political liberty; on the poetry and poetics of evolutionary theory and its opponents; on the relationship between Victorian logic and theories of genre; on deception and the mid-20th-century English Bildungsroman; and on animal ethics and ecological themes in South African literature. 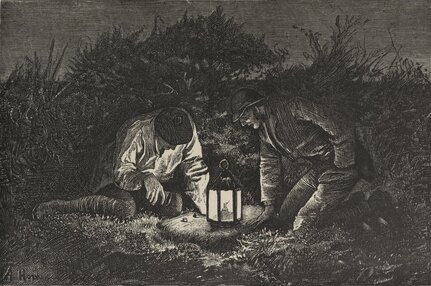 Thomas Hardy, The Return of the Native (illustration by Arthur Hopkins from Belgravia serialization, 1878)
My book manuscript, Hap: Uncertainty and the Victorian Novel, explores how 19th-century novelists envisioned thinking, judging, and acting in conditions of imperfect knowledge. I place novels against historical developments in mathematics, philosophy, psychology, and jurisprudence to argue that William Thackeray, George Eliot, Wilkie Collins, and Thomas Hardy generated distinctive aesthetic and affective responses to uncertainty. I anchor these novelists in 19th-century intellectual contexts with which they were familiar, including the transition from associationism to an embodied picture of psychology and motivation; the rise of statistical thinking and calculative rationality; the renewal of inductive methods in the sciences; and approaches to probability's converging meanings.

I spotlight how novels interact with cultural domains of uncertain knowledge, from gambling to weather forecasting to legal decision. Articulating a phenomenology of uncertainty that is shaped by, yet often resistant to, the nascent sciences of prediction and calculation in the period, novels attend to the felt effects, aesthetic repercussions, and emotional tonality of judging and acting without certain knowledge. I argue that they refract their environing contexts with striking consequences for narrative form, aesthetic theory, and generic commitment. And I claim that they deepen their approaches to scientific knowledge and social concern with a focus on what uncertainty looks and feels like as a subjective experience: on speculations that run against the grain of fact (Thackeray); hesitations that almost entirely usurp action (Eliot); legal judgments and verdicts that lack finality and proof (Collins); and forms of repetition and aggregation that we use in everyday inference (Hardy).
​

​Affective dimensions of uncertainty mediate between the scales of concept and experience: Thackeray’s counterfactual imaginary probes the emotional tone of speculations about alternative realities; Eliot’s interest in theories of decision meets with hesitation as a practical attitude and bodily experience; Collins’ exploration of legal uncertainty is shadowed by the psychology of suspicion; and Hardy’s deployment of logical and statistical models consorts with sensation and intuition. Throughout I draw connections between these styles of uncertain thinking and literary reading, offering updated accounts of inference, evidence, and especially probability—as numerical concept, epistemic conundrum, legal tool, and rhetorical protocol.